In 2013 our love story was published into the Dutch magazine Jan (no. 11, November 2013). As we would also like to share our love story with everyone who follows our travel blog, this is the text from Jan magazine, translated into English:

They (Tamar 31, policy officer at the municipality and David 29, dive master) only spent eight days with each other before he decided to immigrate to Holland for Tamar

‘I thought I would never fall in love again. I was already single for seven years and met some nice guys, but I never fell in love with them. And then, all of the sudden, kaboom, there it was. The feeling that I hadn’t felt for such a long time.’

Towards the end of 2011 I was travelling on my own through Australia when I met David on a dive boat. I had booked a three day trip on a  live-aboard and he was one of the dive masters. After leaving the harbour we started talking. Geez, he was so cute (Note from David: correct). The first evening I did a night dive. As I didn’t have a dive buddy jet, David came along with me. We saw beautiful fish in the dark deep waters and all of the sudden a turtle swam in front of us, surfacing for a breath and then disappearing in the inky depths. It was so special to be there underneath the surface with him that I felt the urge to hold his hand. This feeling came out of nowhere, I don’t know why. When we came to the surface we slowly swam back to the boot, looking at the sky filled with stars above us.

No matter how romantic that evening was, nothing really happened between us the following days. David was working, we were diving four to five times a day and there were always other people present. When we had to say goodbye after three days, we gave each other a big hug and a clumsy kiss, half mouth half cheek. Not until I left, did I realised that I really liked David. In the beginning we kept in contact, but after that life went on. A couple of months later I received a facebook messege from him in which he said that he was going to visit Europe with his family for nine weeks. He asked me whither I would like it if he would give me a visit. From that moment on the contact became more intense with the day. Texting, emailing, skype, we used it all.

On the sixth of May 2012 we were going to meet again at last. He came for five days to The Netherlands together with his sister. I picked him up from Schiphol airport and that is the place where we kissed for the first time. At the arrival hall in front of his sister who I met for the first time. It was really strange, but also very nice, because he is a great kisser. Those five days were a fantastic tornado of happenings. The whole time I was thinking how is this possible, everything goes so fast, how well do we know each other. But from the beginning everything felt so good, as if we already knew each other for years. David is handsome, sweet and we both love travelling and reading books, but in the end those things don’t even matter. What is important is that he stole my heart from the moment we started talking that day on the dive boat. I don’t know how or why, but he had the key to my heart, a key that no other man had been able to find.

Seven and a half months we had to wait until we met again in December that same year. Months of waiting, yearn and endless skype sessions. Sometimes we had skype sessions of six hours. Talking about our pasts, the future, hobbies, politics, ideals and other things.  We shared everything with each other as talking was all we could do, talk, talk and talk. But on the 18th of December he came back to me. He had quit his job, saved a lot of money and said goodbye to everything and everyone in Australia. For a girl he only spent eight days with in real life. We both realized that we made a big decision. For him to leave everything behind, but also for me as I had never lived together with someone and I really liked my freedom.

This is all a year ago now. David found a great job at an International school. He made friends, he likes Holland and he is following Dutch language classes. When I sometimes think about it, I still can’t believe how lucky I am to have found my love. It fits. Everyday is still as great as in the beginning of our relationship, if not better. 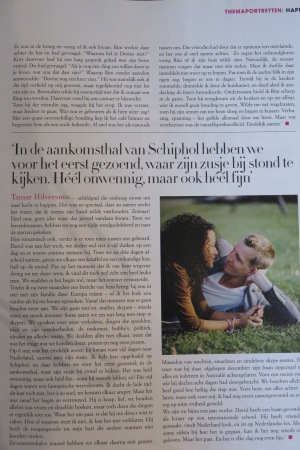