After fantasising about the mysteries of Mongolia for years, two of them have been at last revealed to us, through two weeks of camping and staying in yurts: Every meal should contain milk and meat and Als je haar maar goed zit (Dutch saying with the meaning: All the shit around you doesn’t matter as long as your hair looks amazing)

We arrived in Ulaanbaatar (Mongolia’s capital) on a beautiful morning as the sunrise greeted us around 6am, along with a chilly breeze. We had to wait for a few hours before we could go to our couch surfing hosts (because hey, who likes to get awakened at 6am?) and we used that spare time to good effect. Ulaanbaatar (UB) has free internet around central station (WTF?), so we could get online. We sorted out our train tickets for the next leg (UB to Beijing), we met up with the driver (Bold) and translator (Otka) from customed tour (with whom we were leaving on a 12 day tour through Mongolia the next morning). We also had brekky and in the meantime wrote our blog about Lake Baikal.

The apartment of our couch surfing hosts was amazing. Big, spacious, our own bedroom and bathroom (one for David and one for Tamar, balcony, fast internet, etc). But who cares about the apartment when your hosts (Paul and Sofia) are super awesome? We would have many great times, squeezed into the short time we would spend together. After a nice shower, we wandered through UB, went to a monastery, saw the first concerts and parades for Naadam at the big square. 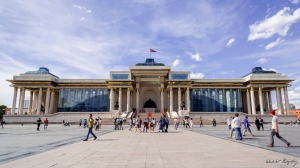 We arrived home in time as Paul and Sofia had organised a big BBQ that evening at the house. We had a lovely evening with people who were mostly our age, but from everywhere around the world including some locals.

The next day we had an early pick up by our driver. One or first day we had scheduled the Khustain Nuruu National Park, to see the Takhi (Przewalski’s Horse). These are true wild horses, pretty different to today’s horses, as you can see in the photos.

They have 68 chromosomes, and regular horses have 66, so they can’t interbreed. Not to produce babies at least… There are only 500 of these horses in the wild, as they went extinct in the 1960’s. An organisation from Holland still had some and helped to breed them a new herd and then brought them back to Mongolia. The view was pretty amazing.

We then went to the Little Gobi to camp. Came across these camels on the way. 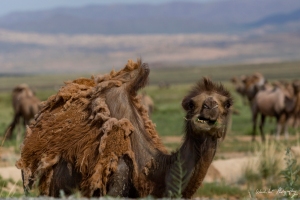 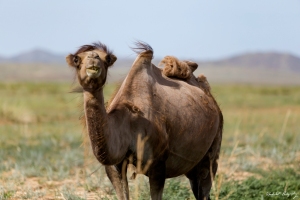 We saw amazing landscapes, we picked a beautiful camp spot and we played soccer in the dunes with local boys living in a Ger (yurt) nearby. 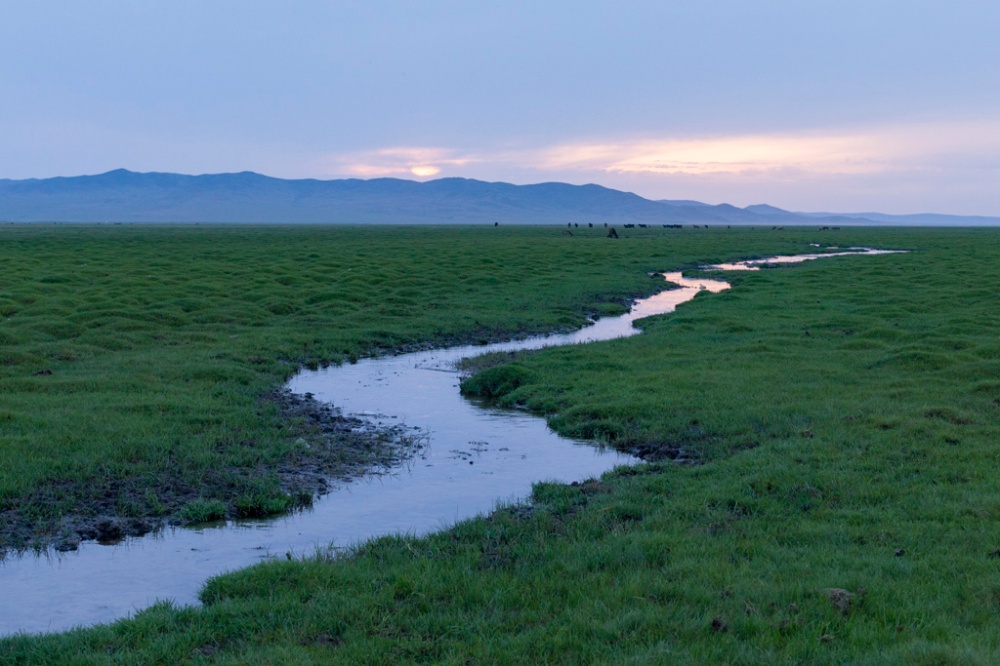 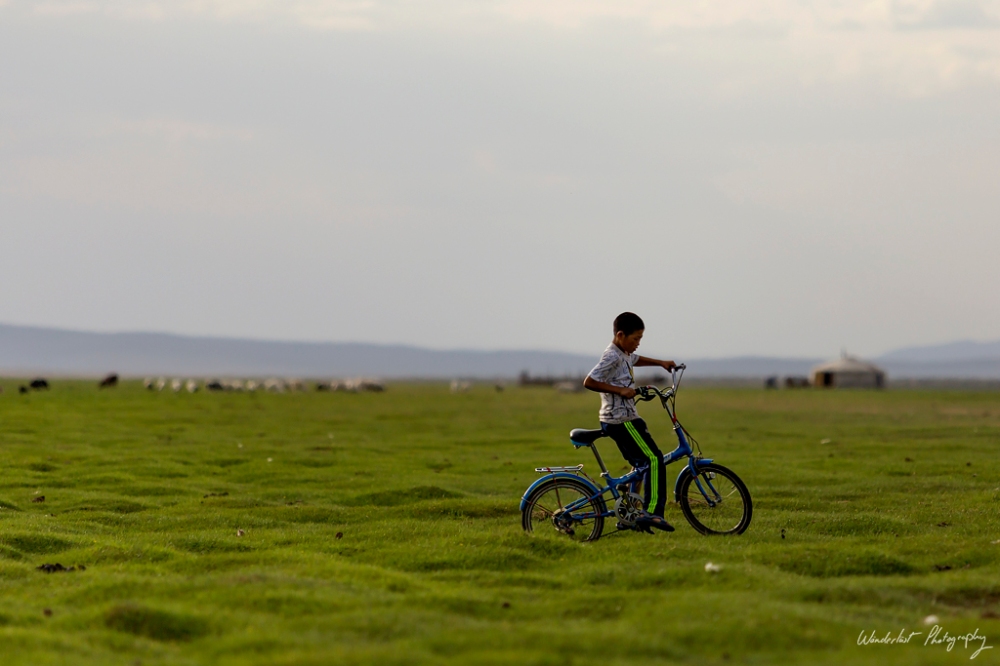 The next day we woke up to a cloudy sky and cold wind. It started raining soon afterwards. We had a long drive this day and in between we visited a Monastery.

Afterwards we had some lunch at Bold’s (our driver) friends (not for free of course 😉 ) and then ended our day at some other friends of Bold who lived in a beautiful spot next to the river in a Ger. As it was raining very hard, we decided to sleep with the family in the Ger that night. As it stayed raining very heavily we decided to stay at the family for the following 4 nights, in this beautiful location.

This is what a Ger looks like in the inside, in case you were wondering.

Our 5 days / 4 nights with the family was very interesting and special. The family contained a man (Soyol) with his wife (Davaa) and son (Tamir). The brother of this man (Zorigt) and his two sons (Bilgvvn and Bagi) lived in their own Ger 20m away, but during the day we all crammed in our one, for meals and games. So, a big change in their lifestyle, with an extra 4 people in an already small space. As it was raining all the time, we couldn’t go out much apart from some small hikes, a short fishing (at least trying) expedition, some horse riding (at least trying), some help with the milking (at least trying) and trips to the toilet (which contained a hole in the ground with 2 planks to stand on and on 3 sites a 50cm high wall. For the rest of the time, we talked (with sign language if Otka, our translator, was doing something else), we played a lot of cards games and Jungle Speed (David gave this game to the boys (Tamir, Bagi and Bilgvvn when we left), some reading, eating, Tamar helped preparing food a few times and that’s it. We also had a good talk with Bold and Otka about our finances as they expected us to be loaded and we expected to make this camping trip as cheap as possible. When we cleared our team expectations we made a new plan for the rest of the trip.

Life in a Ger 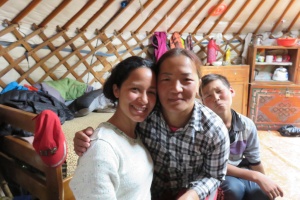 Food: I sure hope you like milk, cause you will have it all the time. Yummy milk tea, with small milk and flour buns, with freshly made butter to spread on top. Meat and noodles (made fresh with milk and flour) with some potato and onions for lunch. Dinner, something similar. It was tasty, but the only ‘spice’ they use is salt. No pepper, no herbs. Just salt for flavouring. 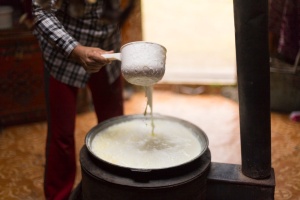 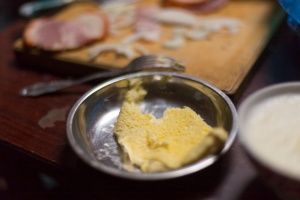 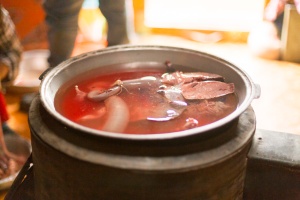 Sleeping: We had our mats, luckly, cause we slept on the floor. There is a draught that comes through, I guess so you don’t stink each other to death. The dogs bark loudly at the slightest provocation, which means no long sleep.

Activities: We played some strange games with the joints on horse feet. 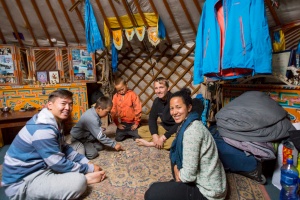 Some cards and jungle speed

Some small hikes in the area and some little horse riding (more like horse sitting, but still interesting) 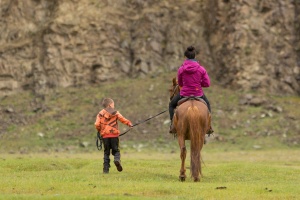 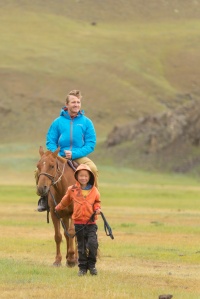 But really, the 7 and 11yr olds were pretty good at it 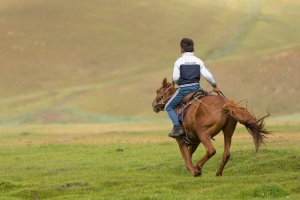 Tamar had a go at milking a yak 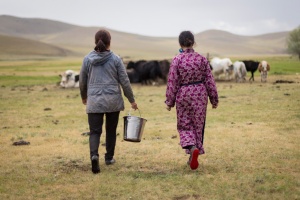 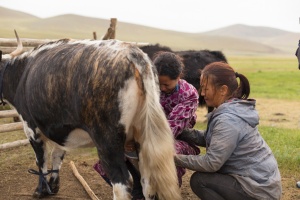 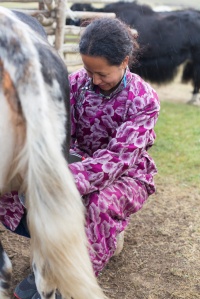 We bought a goat and Tamar helped make sausages 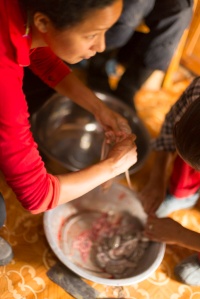 We also had some fun under a double rainbow

After 5 days of no privacy at all, living with so many people in one Ger, we were ready to go camping again. We went to a beautiful spot in the mountains, only a 1hr drive from were we stayed in the Ger (if you look carefully, you’ll see our tents at the bottom 😉 ) 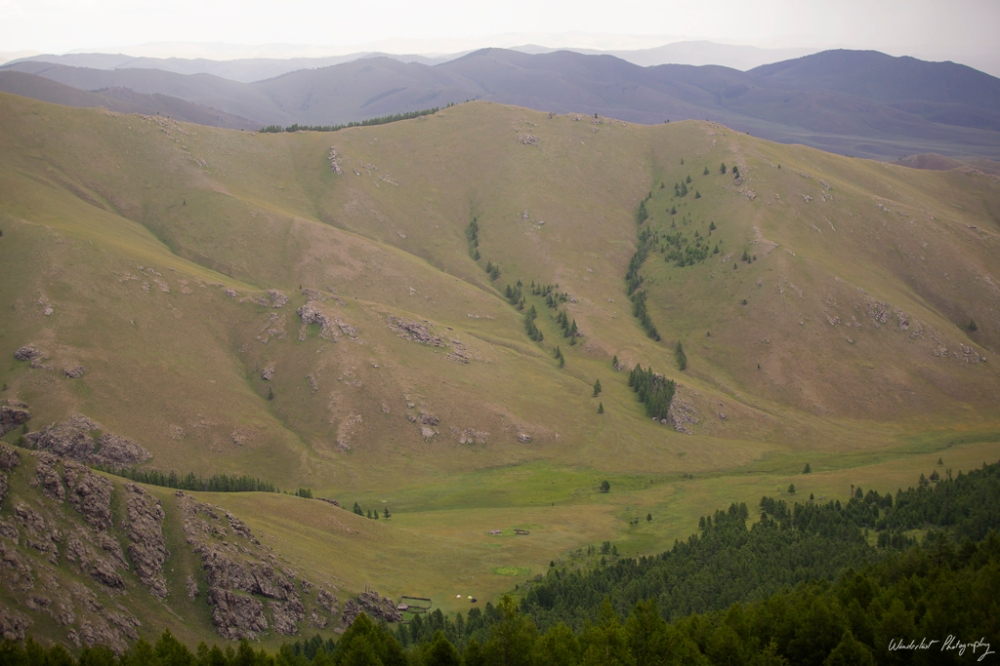 During the two nights that we stayed there it kept raining, but we also had some dry patches of a few hours. In those dry times we hiked up the mountains cooked on our self made camp fire (which we kept going for three days). 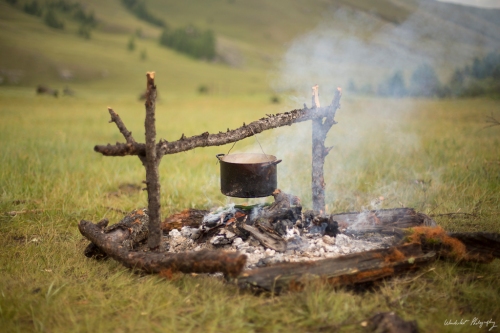 One the first day David even had time to hang up his hammock.

The mountains gave us wild onions to eat and for the rest we cooked Mongolian meals, mostly soup and always consisting of meat, rice/pasta and onion. Below is a picture of Bold (our driver), collecting wild onions and going hunting with his AK-47 (automatic rifle, used in armies the world over). 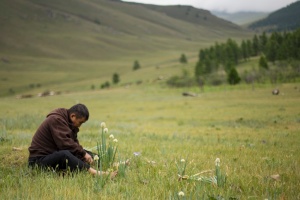 On one morning a herd of horses visited us and made our breakfast view even more spectacular.

We must say, we are so happy with all our gear. We needed the hiking boots and warm clothes, our sleeping mats are fantastic and our backpacks also work great. 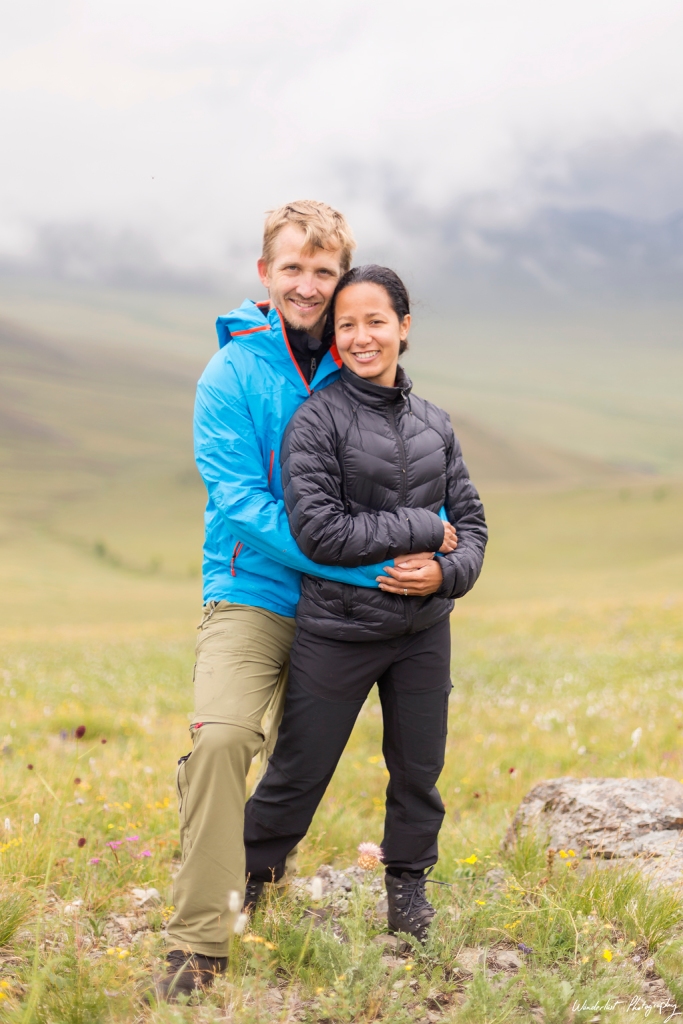 On our way to Lake Ogii, we picked up the rest of the goat, drove through the rain through overflown rivers, finding new paths and really needing the remote 4X4. 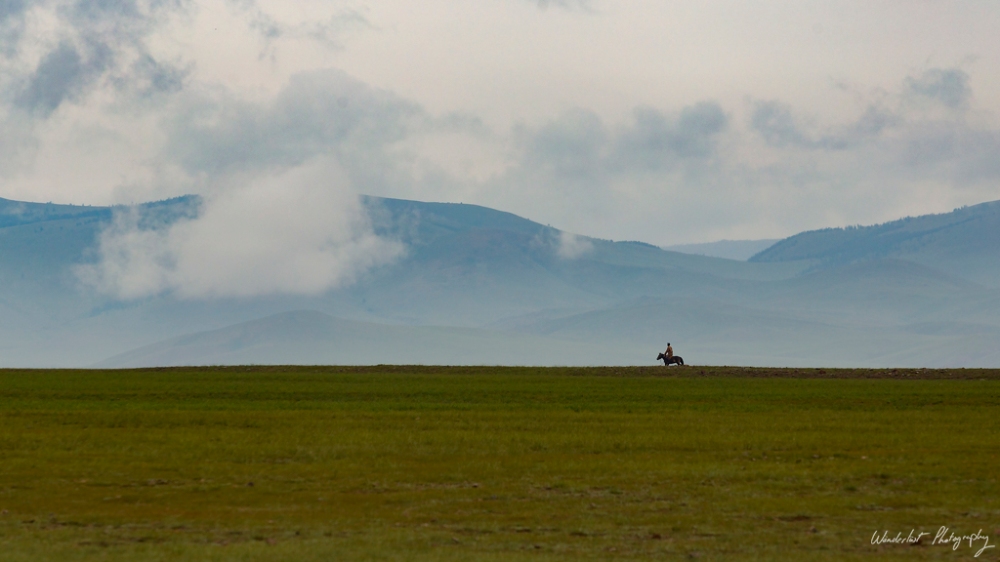 We saw a lot of Mongolian foxes during this trip and marmots.

When we arrived at Lake Ogii we were a bit disappointed as it didn’t look that spectacular and we became almost insane because of the million flies. We had our first night of clear sky, but decided to leave the next day after brekky to the next lake.

The spot at the next lake (Baynnuur — rich lake) turned out to be beautiful. After setting up the tent

(and David fell in at a certain moment).

And the best thing, the weather was changing. The next day we moved across the road to the  dunes. There we could swim in a little lake and wander through the dunes. We saw owls, lizards, a lot of stars every night and beautiful sunsets. 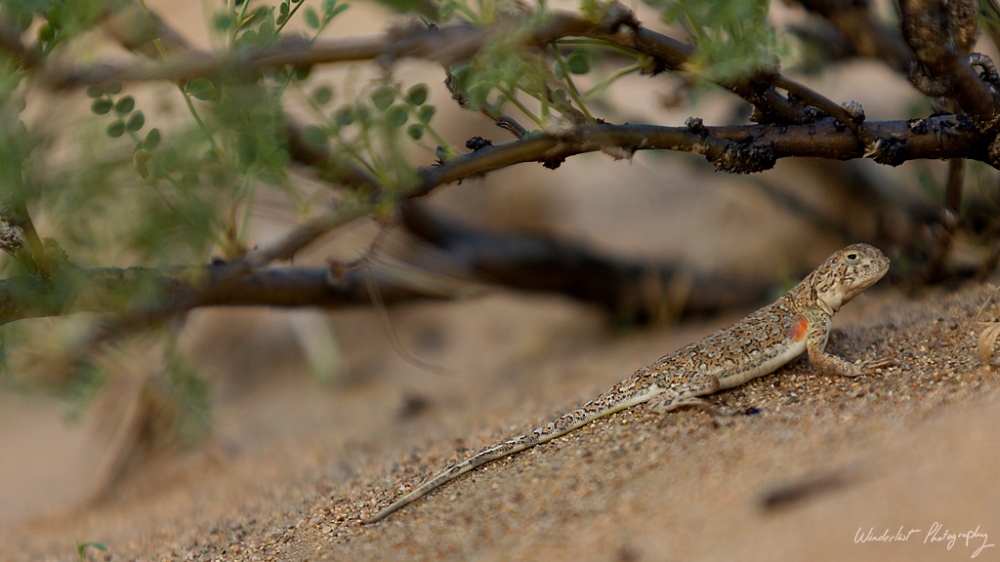 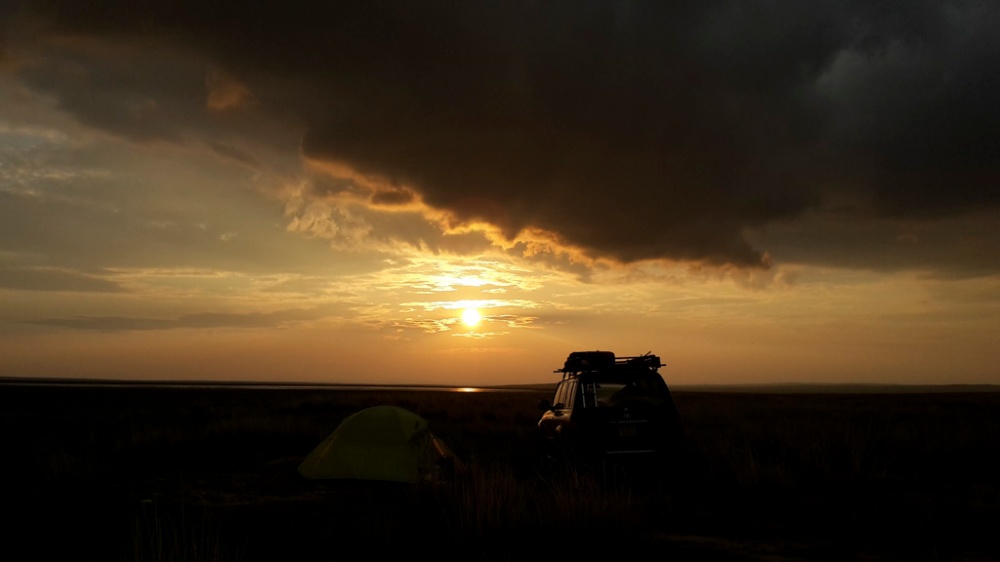 And David was able to set up his first rodeo line since we left from Rotterdam. A perfect ending for an amazing trip.

The trip wasn’t always easy though. Because of the rain we couldn’t be outside as much as we wanted and the cultural differences also made it hard sometimes. Often we had the feeling that we were on the trip of our driver and translator, as they decided when we were going to have lunch, when he was going to hunt or stay at friends or what kind of food we should buy in the supermarket (without asking us). But our driver had great knowledge of the country and we were also lucky that he knows a lot of people. And or translator was a young boy (22 years old), but did his best to make the trip as nice for us as he could.

When we arrived in UB we needed our first shower in 12 days time so bad. We also realised we lost a lot of weight after our Mongolian diet. After we were clean again we went with our host to the amusement park with children from the orphanage.

A trip they organised and paid for. In the evening we cooked a nice dinner with vegetables for our hosts! We had a couple drinks, which turned into couple more drinks and philosophy. 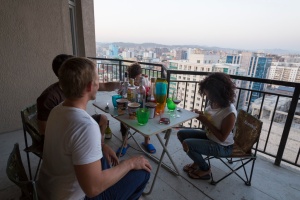 We went to Bed well after midnight, alarm set for 5.30am. Would we make the train early this time? And finally, yes! With a nice Belgian couple in our coupe, we meandered with the train into the desert. 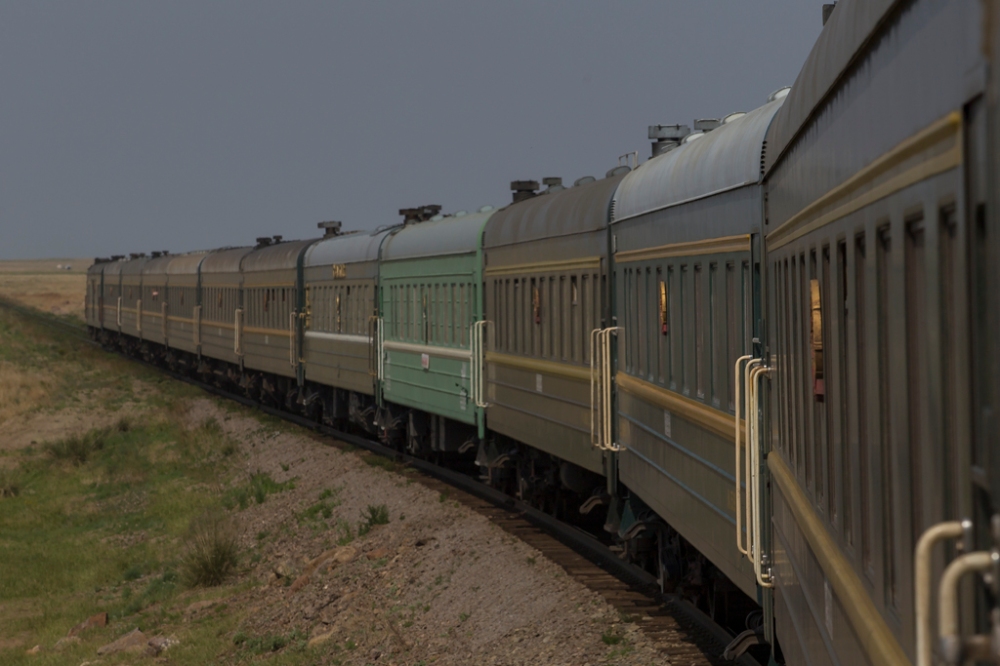 P.S. As we are we in China, we don’t have any access to Facebook or Gmail, so if you have been trying to contact us, sorry! We’ll get in touch when we are out of the country 😉

6 thoughts on “Mongolia: The Land of Milk and Meat”

A couple of lovers, from Holland and Australia, travelling the world and experiencing just how people from all over the world live.
%d bloggers like this: