The ‘to do list’ burned, the house locked, a nice walk to central station with our bags and in between a short stop for some last herring (haring) and flowers for the mother of Tamar. To make it easy for us and everyone else to say goodbye we organised a goodbye lunch and drinks at restaurant Engels (located right next to central station). What an emotional day that was! 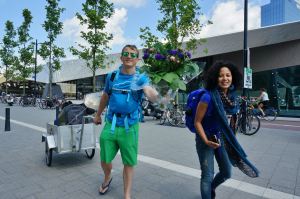 Seeing a bunch of friends and family, many of them for the last time in a year was tough. David enjoyed the free flowing beer and Tamar the many conversations :-). We knew that the final goodbyes were hours away, but then it was minutes and finally here they were! As we waved you all goodbye, we collapsed onto our seats, feeling both elated to be finally on our way but also dealing with the emotional roller coaster. We started to get back to our silly selves soon enough and changed trains at Utrecht, met some nice fellow travellers, Tobias the software designer and a friendly lady from Moscow. After what seemed a short time, we got off at Duisberg  and met up with an old friend of David, Torben. He had driven an hour to come and spend 1hr with us. We had a shitty meal together, caught up on news, posed for a photo and then we got on the night train to Warsaw! 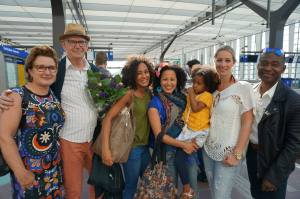 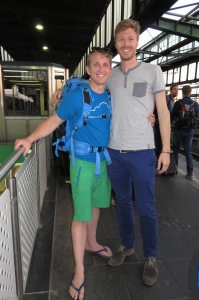 This was awesome! We got a 3 person cabin, just to ourselves! Hot water from the sink, electricity and a great view, what more could you ask? Plus coffee, tea and a super weird caramel/cheese/random flavour croissant for breakfast. We spent the time doing different activities, as you can see below:

Warsaw was as awesome as David remembered it, from previous trips to Poland. After a super delicious lunch at a vegan burger place, we wandered back streets down the river and enjoyed a cold beer in the hot sun with a DJ playing music on the background. Ah yes, the life of a traveller is a tricky one indeed…

The next train was less luxurious then the first night train. This time we had to sleep in different room. Tamar with two other ladies and David with two other men. The first one was a nice German guy called Klaus, with whom David had a bunch of nice conversations and shared many laughs. About the second guy David would like to tell you something: It was very hot in Warsaw and from the train, I saw an overweight man approaching the train, lumbering along with many bags. Sweating like he was in a sauna. And of course he was in my cabin. He neatly arranged his luggage all over the cabin, managing to take up the maximum space possible. Being a forward thinker, he had already drunk more than a bottle of vodka, to reduce the weight of his bags, I guess. Imagine a super sweaty, unwashed guy, a smoker, alcohol fumes pulsating from his body with a physical force. Below, I present you with a couple of covertly snapped images of this fine specimen: (also, please also imagine the sound of vomit, gently splashing onto the carpet like a lullaby from hell, at 1am…)

The rest of the travellers on the train were very nice people and we had some interesting chats. Tamar’s cabin partner spoke only Polish, French and poor quality English. Tamar would speak to her in English, she would reply in French and they both had some long and lovely discussions. The most interesting part of this part of the train trip was entering Belarus. At the border military people come in the train to check your passport and search through the whole train for people that shouldn’t enter the country. In our train wagon Tamar was the only one that had to open her bags. We kinda think that is has something to do with them being jealous of her beautiful skin colour :-). Also the train undercarriage needed to be replaced as the train tracks in Belarus and Russia are a different gauge (width) than in Europe. So the whole train got lifted up to get the replacement done. 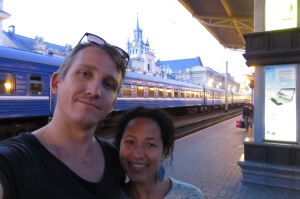 When we arrived in Moscow we had to pick up the key at our couchsurf host’s work. Luckily this was close to the railway station where we arrived. Everything went very smooth. The subway system is very fast and easy over here, so getting to our new house for the next two days was no hassle. We filled our two days in Moscow with playing the tourist. We saw the red Squire, The Kremlin, Saint Basil’s Cathedral, Cathedral of Christ the Saviour and we saw many many subway stations as David wanted to take pictures of the most beautiful of them.

And now the time has come to move on again. In a few hours we will step on the Trans Mongolia Express and head our way to Irkutsk (Lake Baikal). This will take us 5 days. Can you imagine 5 days on the train…? Hopefully we have nice people in our carriage has we have to share one with two other persons. But the best thing about travelling by train is meeting and chatting with other people, so we bet everything will be fine. And if not we just get drunk with vodka 😉

3 thoughts on “Rotterdam to Moscow”