David and Tamar look at each other. There is no way we are going to make it with three metro stops, at least 2 sets of escalators, numerous stairs and figure out where the train actually leaves from, in just 14 minutes. Our first big mistake of the trip and after only 4 days. Maybe we should start at the beginning… Tamar pulls the straps out and converts her big suitcase into a backpack, (looking like a turtle) as we wait for the metro. Once in the fully packed metro David asks Tamar the time is… 14 minutes left before the train leaves and we are not even close yet! At the correct station (luckily) we sprint out the metro and down the platform, impatiently waiting on the escalators, frantically asking in atrocious Russian where “’trans-Siberian Irkutsk train” is. Replying in what seemed like slow motion, the security guard motioned vaguely and we were off. Running as fast as possible, down the length of another underground station, up more stairs, bursting into the entry, interrogating more vaguely official people and getting equally vague answers. David attempts to run faster than Usain Bolt as he ran towards the train platform, leaping stairs like a graceful donkey. We are running as hard as we can, our mouths dry and our backs soaking wet. We both know we are not going to make it, but we are not ready to give up yet. Finally we see the train station, but which platform? As we run pass the platforms our fears gets even worse. ‘Last platform’ a lady working at the railway station says, but it is quite unclear if she means left or right. We choose to keep going right. And there it is, we see a Sign, not from heaven but for us even better, from the railway company: Москва в Иркутск (Moscow to Irkutsk). Current time: 1349. Departure: 1350. So close, but can we actually make it? Becoming even more panicked now that we have actually found the train, can see it but must still run 50m in the sun. No way we will make it! Please don’t leave while we are almost there… We reach the first wagon and jump on. Babbling incoherently to the train attendants, David thrusts the tickets at them (which are conveniently printed in German, no idea why). After some head scratching, vague gesturing, we determine that we are on the right train! Hurrah! As Tamar throws her bags aboard, the train pulls away from Moscow. What a cunning, devilishly tricky plan, to get the most out of our Moscow trip. Such detailed planning! We had to sleep in, have a long self made lunch, write and post the last blog, plus slowly pack. Can you imagine how smart we are, to be the last people on the train? Now, off to our cabin. First, through 3rd class. All open plan (even more horrible than open plan offices, which David didn’t think possible), they fit 8 bunks in the same space as the 4 bunks in 2nd class (our class). Ah, this is how we will travel in India Tamar says to David. Saying спасибо (Russian for thank you) many times, we pushed and dragged our bags through 7 carriages, before finally arriving in our own. What awaited us there? Drunk, smelly people? No one? Russian babes? Russian man models? Curiosity burning, we slid back the door to reveal: A father and 8 year old daughter. Precisely the sort of the cabin partners we needed. David later generously accepted this man’s offered to help him with the onerous task of getting rid of several large beer bottles. Verschrikkelijk, as John would say ;-). After 5 days (4 nights) of being on the train, we can still honestly say that we like it. No, it is not luxury, we sleep in a cabin with two other people, the whole carriage (ours is number 7) shares two toilets which also serve as bathroom (and the best location to stick your head out the window for a selfie). But it is great to talk with people, share food, drinks and stories, read, look out of the window to the landscape that changes and just relax on our seats/beds/dinner area.

From Moscow to Irkutsk we have had 6 different coupe partners. From the 8 year old that wanted to play cards with Tamar all the time, to a man that showed us ballroom videos, but also a fat guy that snored so bad that even during the day it is repulsive to listen to it (Click here to listen to it, David secretly recorded this abominable sound). It all adds up to this great experience. Jumping out of the train at stations with long stops, trying local food, without even knowing what it is. We hear so many people say, ‘Wow, the Trans-Siberian express that is also one of my dreams.’ The only reply to that is, don’t dream but do it, as it is an amazing experience, an experience of a lifetime. Now in Irkutsk, we are already missing the Trans-Siberian express 😉 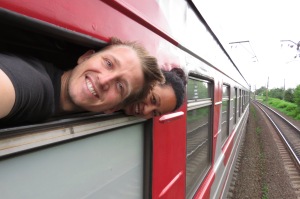 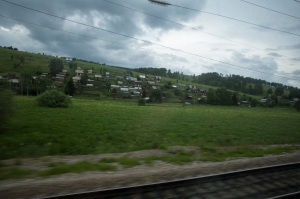 7 thoughts on “Missing the Trans-Siberian express…”